Message on the Occasion of Fr. Emmanuel’s Death 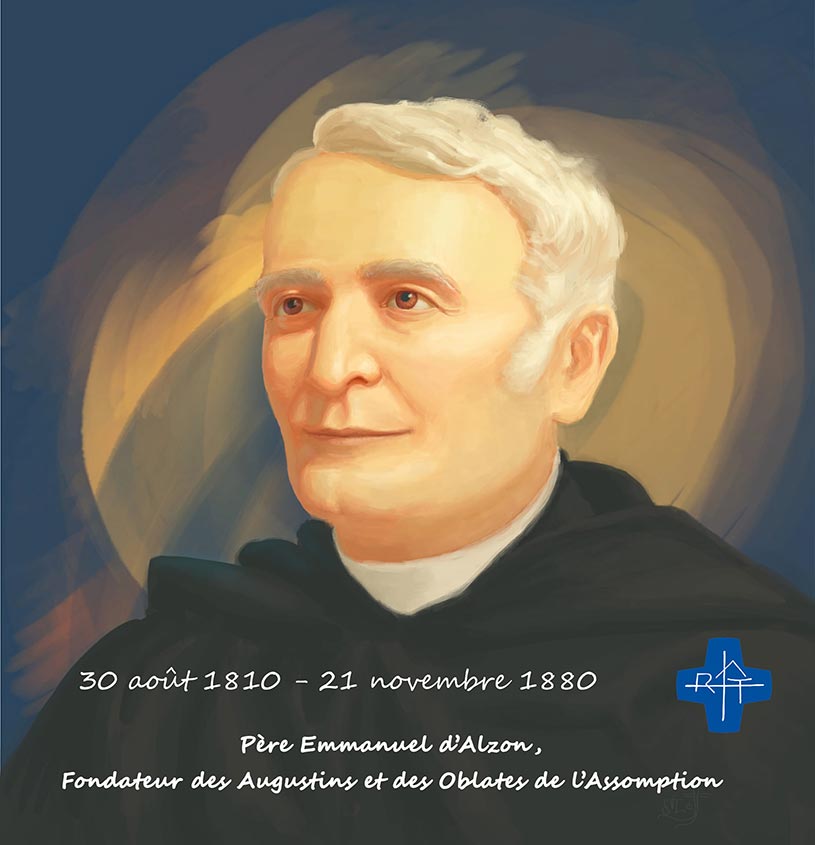 It is good to remember our history, but it is even more necessary to remember the place that Father Emmanuel d’Alzon occupies in our hearts and actions, for all of us, religious and lay people of the Assumption.

Father d’Alzon died on November 21, 1880 after having lived his passion for the Kingdom to the fullest. The founder of the Augustinians of the Assumption and the Oblates had a strong will that he put at the service of the Gospel. His life was marked by events that were often difficult: poor recruitment, religious brothers in great demand, recurring economic difficulties, etc. Despite everything, he never despaired in the mercy of God. As we prepare for the 34th General Chapter, it seems interesting to me to hear what Emmanuel d’Alzon said in 1868 on the occasion of the 6th Chapter of our Congregation.

The times in which we live are no less turbulent and troubled than those of our beloved founder. At a time of unprecedented crisis in the Church, we must proclaim loudly that we love our mother despite her sins and weaknesses and that we want to contribute to her renewal. This will be our way of honoring the memory of Father d’Alzon. At a time when the world is plagued by many armed conflicts and when poverty is spreading dangerously, it is good to contribute to a new world order by taking care of our earth and developing fraternity. Faced with the primacy of the economy, we want to show the value of sharing and solidarity.

“The Kingdom of God is at hand (Mk 1:15). Living and proclaiming the hope of the Gospel” will be the theme of the next General Chapter. We are convinced that the Assumption has a role to play in making the world a better place. Our hope comes from our faith in Jesus Christ; the same faith that animated Emmanuel d’Alzon.

Reviving the Catholic spirit in the world is a noble mission to which we can dedicate ourselves body and soul. It is about working for fraternity, peace, and justice. We are men of faith and communion, in solidarity with the poor and the little ones. Father Emmanuel d’Alzon instilled in us his zeal for the Church. May we, wherever we are, act so that the “Catholic spirit” may be a light to renew the world.

I wish you a beautiful commemoration of the dies natalis of our beloved founder.