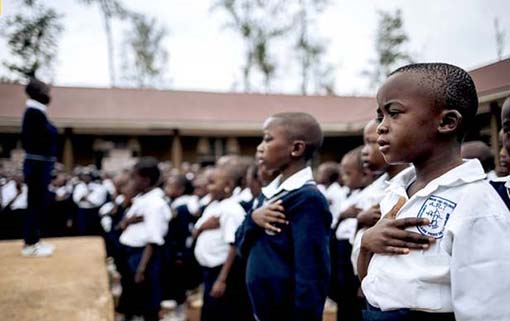 Prince of Peace School, founded by the Assumptionists, is located in one of the most dangerous regions of Africa – North Kivu in the Democratic Republic of the Congo. The region has been marked by seemingly endless massacres of civilians by various armed groups. The school, which opened in the fall of 2016, is a project filled with hope for all involved.

The following excerpt from Le Pélerin Magazine describes how the school was founded in direct response to the violence in the region:

“In the face of the suffering of street children, wandering through the streets of Beni after witnessing their parents being massacred in their villages, the Assumptionists had to act.”  Fr. Protais Kabila, then the provincial of the Assumptionists in the eastern region of the DRC (the capital of which is Kinshasa) still recalls that day in 2016 when he convinced his confrères to build a school. But not just any kind. For these orphans of war, the teaching would be centered on non-violence. Its name describes an entire program: Peace of Peace. With money given by friends, he built 8 classrooms on a piece of the Congregation’s property on the outskirts of downtown Beni, an ever-growing metropolis, with 100,000 in the city center alone.

“In addition to a basic traditional curriculum, I insisted that we speak of friendship, dialogue and reconciliation, by employing games and mini-plays,” he explained. “By the use of these skits, the children would re-learn a sense of traditional welcome, which has given way today to distrust and fear of the stranger.” “Three times a week we speak of the Gospel to the children,” explained the current director, Fr. Matabishi Kalondero. “We would like to bring the youngsters wounded by war to renounce a desire for revenge. If they had remained on the streets, they would have easily been recruited as boy-soldiers by one faction or another. Thanks to this work in common, I see them blossom and become happy.”- Le Pelerin Magazine, November 26, 2020 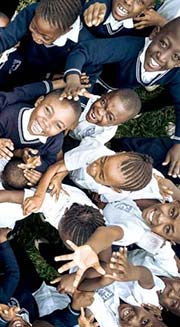 Today, the school serves hundreds of children, not to mention the many adults who use the classrooms in the afternoons to learn the basics they were never able to as children. Here is a rundown of our numbers this year:

The total number is 683 students.

A donation to the Prince of Peace School goes a long way and supports the many needs of the school, including:

Each donation is extremely welcomed, needed, and put to good use. If you would like to support the vulnerable youth of the Congo by donating to Prince of Peace School, please visit our support page and select “Prince of Peace Beni School – Congo” when filling out the donation form. We sincerely thank you for your collaboration in this hope-filled project!