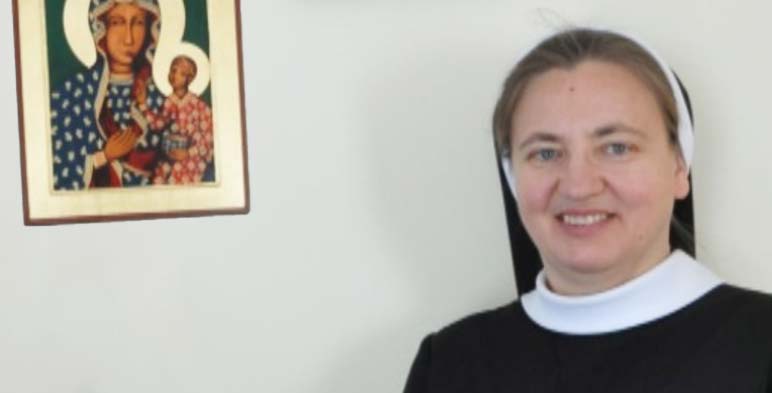 The article was first reported by The Catholic Free Press.

Alicia Wilk, a widow in Poland, is happy just to learn that her only child is still alive.
Her daughter, Sister Beata Wilk, 54, of the Sisters of the Holy Family of Nazareth, is helping people in war-torn Ukraine, where she is regional superior of the St. Michael the Archangel Region.
Sister Beata has also served and received support from Catholics in the Worcester Diocese.
Father Richard W. Polek, pastor of Our Lady of Czestochowa Parish in Worcester, told The Catholic Free Press this story Monday after talking with Mrs. Wilk by telephone and learning that she had received messages from Sister Beata.
He said he texted his friend Sister Beata to offer the parish’s prayers and support after Russia invaded Ukraine on Feb. 24. He met her when he was in the seminary and she was in medical school in Poland where she joined the Sisters of the Holy Family of Nazareth. Years ago she went to Ukraine to serve.

“She worked closely with Capuchin priests in Kyiv,” Father Polek said. “She worked with adults, preparing them for baptism and the sacraments” that they didn’t get to receive under communism.
“She’s also involved in a new project. Last year they opened a new school in Kyiv,” he said.
To help with the school, the parish sent a $25,000 donation from the sale of the convent here that once housed the Sisters of the Holy Family of Nazareth. The sisters had staffed the parish’s school, St. Mary’s, which is now closed. The former convent is a home for unwed mothers and their babies, called Visitation House.
Father Polek said he thinks the school in Kyiv is temporarily closed because of the war.

“The whole world is looking in horror today toward the Ukraine invaded by Russia on Thursday morning,” says a Feb. 26 report on the sisters’ website www.nazarethfamily.org.

“There are six houses of our communities on Ukrainian territory. Two of our Sisters were forced to leave Kherson. Now there are fierce battles going on there. The other communities have remained in their places, supporting the people …

“In Browary (where Father Polek said Sister Beata serves) the Sisters also moved to the parish, which is run by the Pauline Fathers,” the website report said. “The situation is similar to the one in Kyiv. Together with them people of different religions live in the parish. Last night because of the danger everyone slept in the basement. Sisters went among groups of people in different rooms and prayed with each group. They also help to prepare meals and take care of the children. Yesterday there were many people with them, and new people keep coming…”

Father Polek said Sister Beata came to Worcester with her mother to visit him in February 2016 and helped with a Lenten retreat in Polish at Our Lady of Czestochowa. One of the Capuchin priests serving in Ukraine preached and Sister Beata helped lead some group discussions, he said.
“I don’t want to call her. She is busy,” Father Polek said Monday. “Her mom told me they have food for a few more days.”
He said he announced at Masses last weekend that Our Lady of Czestochowa will take a collection for the sisters and those they are serving, but he is not waiting until the money comes in because they need it now. He said he sent $15,000 Wednesday to the Sisters of the Holy Family of Nazareth in Krakow, as Sister Beata recommended. They would deliver it to the sisters in Ukraine. As of Wednesday, $9,500 had been contributed, including $5,000 from a non-parishioner who attends Mass at Our Lady of Czestochowa, he said.
The parish will be reimbursed when money from the collection comes in, as he is confident it will, he said. The parish can be a center for anyone wishing to donate money for people in Ukraine, he said. He said a family from India already contacted friends from his parish asking how they could help.
Father Polek said he spoke at his Masses last weekend about Sister Beata and priests from his home diocese of Tarnow in Poland who have been serving in Ukraine for years. He said he asked people to pray for Ukraine and that a new group has been formed in his parish for that purpose. Existing groups are also praying.
The Metanoia prayer group asked to use the church to pray the rosary for Ukraine after last Saturday’s vigil Mass, he said.
For Ash Wednesday, when Pope Francis had asked for prayers for Ukraine, “we will pray during our Masses,” Father Polek said.
“We will pray for the Ukraine” at the monthly first Thursday Mass in English at 6:30 p.m. which is followed by adoration, the rosary and prayers for vocations until 8 p.m., he said.
Prayers for Ukraine will also be offered on Fridays when the parish has adoration and the Divine Mercy Chaplet in English and Polish at 3 p.m., and Stations of the Cross in English at 5:30 p.m. and Polish at 6:30 p.m., followed by Mass in Polish.
The prayers will continue at monthly first Saturday Masses in English at 7 a.m., followed by the rosary, Father Polek said.
He said he is also starting something new to pray for Ukraine in first Saturday Mass and devotions in Polish, starting at 8:30 a.m. These will be held on the first Saturday of each month for at least five months to respond to a request of the Blessed Mother in apparitions at Fatima, Portugal, he said.
Other Polish priests in the Worcester Diocese said they do not have connections with Ukrainians but were praying for them and thinking about how to help.

Editor’s note: Those wishing to contribute to Our Lady of Czestochowa’s collection for the Sisters of the Holy Family of Nazareth can donate online at the parish website, olcworcester.com, or send checks made out to the parish to, 34 Ward St., Worcester, MA 01610. “Ukraine” should be written in the memo line.