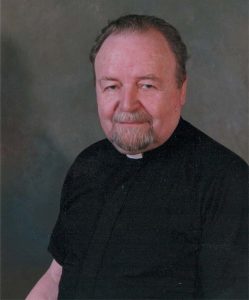 In addition to his fellow Assumptionists, he leaves a brother, Albert Fortier of Waterville, ME; 16 nephews and nieces, and many grand-nephews, grand nieces and cousins. He was preceded in death by an infant brother Norman and by 2 sisters, Jeannette Gaughan and Marie Fortier.

He was born on August 8, 1927 in Hartford and raised in Rumford, ME, the son of Armand and Cecile (Dionne) Fortier. He graduated from Assumption Preparatory School in 1945 and then from Assumption College in 1950. He completed theological studies at the Grand Seminary in Quebec City in 1954 and earned a Licentiate and a Doctorate in Philosophy from Laval University there in 1969.

He made his religious profession on September 8, 1948 in Quebec and was ordained to the priesthood on December 19, 1953 by Bishop Maurice Roy in Quebec City.

Father Theodore was a philosophy professor at Assumption College from 1958 to 1980 and again in Beni-Butembo, Zaire from 1982 to 1984. He was assigned to the shrine of St. Peter in Gallicantu in Jerusalem from 1980 to 1982. He served as the chaplain at Quincy City Hospital for 17 years. From 2002 to 2009 he ministered at Saint Therese Parish in Athens, Greece. He retired in 2009, living at the Assumptionist house at Old English Road. For the last 12 years, he was a resident at Christopher Heights in Worcester.

His funeral will be held Tuesday, February 15, at 10:00 AM in the Chapel of the Holy Spirit, 512 Salisbury Street, with the Very Reverend Dennis M. Gallagher, A.A., Provincial of the North American Province as the principal celebrant. Burial will be in Saint Anne’s Cemetery, Fiskdale. A time of visitation will be held from 9:00 to 10:00 Tuesday morning in the chapel. Donations in his name may be made to the Assumptionist Retirement Fund, 330 Market Street, Brighton 02135. Arrangements are under the direction of Sitkowski, Malboeuf & Hickey Funeral Home, 340 School Street, Webster.

Fr. Ted was a serious man.   I mean that in the best sense of the word.   There was nothing superficial or pretentious about him, and certainly nothing frivolous.   He knew that his life was taken up by something greater than himself.    He was serious about the truth.  The truth mattered very much to him.   And that meant, of course, that he could be demanding.    He was sharp in the two ways in which we use the word – he had a bright, clear mind, but he could also be a bit cutting.

My first, sharpest memory of him is connected, strangely enough, to baseball.  It was October of 1967, I was 19 years old, and the Red Sox, the Impossible Dream Red Sox, were, quite improbably, in the World Series.  In those years, the games were still being played in the afternoon, and instead of watching my favorite players on TV, I was sitting in Fr. Ted’s metaphysics class, trying to get my head around Immanuel Kant’s Metaphysics of Morals.  That’s not really true.   I was daydreaming – mostly about the Red Sox, but also because I knew I was never going to get my head around the Metaphysics of Morals.  The following year, Fr. Ted was the reader for my senior philosophy thesis, which was on the possibility of friendship with God.

Ted was a mainstay in the philosophy department here on this campus for quite a number of years, until a sabbatical in the Holy Land and then a call to teach a different group of students in a very different place, in the Assumptionist mission in Zaire, as it was called in those days.  Ted’s desire to help out in the missions, although in the end it did not work out as well as he may have wanted, gives us an insight into the nature of the truth to which Ted had given over his life and sheds light on the “pastoral turn” that followed.   It was a truth not to be found so much in the abstruseness of metaphysics, but a saving truth, a truth that was inseparable from seeking the good of the human person, and according to our Rule of Life, to go wherever God is threatened in man and man threatened in the image of God.

I think this is the thread that ties together Ted’s academic career with his later service as a hospital chaplain in Quincy and a pastoral associate in our Assumptionist mission in Athens.  He was a man of the Church.  And in this, he loved the charism of Fr. d’Alzon, so rooted in the essentials:  in the Eucharist, in the daily discipline of common prayer, and in the absolute centrality of Jesus Christ as the way, the truth and the life.   Ted’s life made sense in wanting Christ to be known.

He was a priest through and through.  I think that’s what prompted the choice of today’s readings, two of which draw out what it means to be sacramentally incorporated into the truth of God’s saving work through baptism and the Eucharist.    While this applies to every Christian vocation, the priest is especially configured to Jesus Christ.  This means, of course, to be configured to his suffering.   Ted had his fair share of that suffering, and we believe that all of it is taken up into the mystery of God’s saving design.

There is a coherence in the funeral of a man who committed his life to following Christ, poor, chaste, and obedient, and who spoke the words of consecration each day – this is my body given up for you, this is my blood poured out for you.  His last act of handing over his life to God was of one piece with the spiritual dynamic that marked the whole of his life as a religious and as a priest.  Yes, he was configured to the suffering and death of Christ, but he is also configured to his resurrection.  That is why our celebration today is so full of hope.  We pray that Ted’s sins will be forgiven, so that he may enter into the fullness of God’s presence.